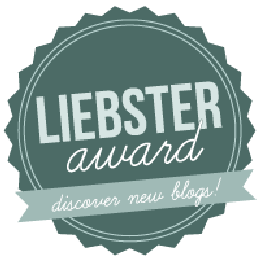 Thank you, Don at Zoopraxiscope for nominating me for this honor (?).

I accept both the awrd and the challenge with but one exception. Here are the rules I so lazily copied from Don's site:

The Quasi-Official Rules of the Liebster Award
If you have been nominated for The Liebster Award AND YOU CHOOSE TO ACCEPT IT, write a blog post about the Liebster award in which you:
1. thank the person who nominated you, and post a link to their blog on your blog.
2. display the award on your blog — by including it in your post and/or displaying it using a "widget” or a "gadget”. (Note that the best way to do this is to save the image to your own computer and then upload it to your blog post.)
3. answer 11 questions about yourself, which will be provided to you by the person who nominated you.
4. provide 11 random facts about yourself.
5. nominate 5 – 11 blogs that you feel deserve the award, who have a less than 1000 followers. (Note that you can always ask the blog owner this since not all blogs display a widget that lets the readers know this information!)
6. create a new list of questions for the blogger to answer.
7. list these rules in your post (You can copy and paste from here.) Once you have written and published it, you then have to:
8. Inform the people/blogs that you nominated that they have been nominated for the Liebster award and provide a link for them to your post so that they can learn about it (they might not have ever heard of it!)

So let's have at it. Starting with Don's questions.

1. Who should write your biography?
Melville would probably put the proper style I would like to have, but Lovecraft would frame it better.

3. Who should do the musical score for the movie?
Ian Hunter and the late Mick Ronson as a collaboration. Good poetry and great arrangement.

4. Please tell a favorite joke (keep it tasteful, thank you).
A man decides to take a short vacation from his job and travel somewhere exotic. So, he books a trip to a small, essentially untouched Pacific island where the native culture is still intact.

So, he sets sail on his chartered ship to the island paradise. As the boat is approaching the island, he notices the sound of drums. "How quaint," he thinks, "the natives are engaging in an ancient ritual with drums." He arrives at the island and gets something to eat. All this time, the drums are going. Well, after a few hours, he begins to wonder when the drums are going to stop. So, he asks a native why the drums are going on so long. The native runs away screaming with a terrified look on his face.

Thinking he has probably disturbed the sanctity of the native ritual by asking an intrusive question, the man decides to just forget about the drums and enjoy his vacation. But, after another two days of continuous drums, it's really beginning to bother him. So, he asks another native, "When are the drums going to stop?" The native just looks at him. So, he asks, "Why are the drums going on so long?" This native, like the first one, runs away screaming.

So, after another two days, the man has had it with drums. He grabs the first native he sees by the neck & demands that he make the drums stop. The native replies "I would rather die than be the one who stops the drums." The man asks him why. Slowly, the native answers…"Because when the drums are over, the banjo solo starts!"

5. What book should everyone read?
Twice-told Tales, Nathaniel Hawthorne.

6. What obscure movie is worth tracking down?
Wow, lots of possibilities. Here's three:

Brazil
Dreamchild
The Gods Must Be Crazy

7. Do you have a battle song, i.e., a tune that you hum, sing or stomp your feet to while on the way to a difficult day at work or an unpleasant appointment?
It varies, really. There is no song where the lyrics are geared towards inspiration (Big Time by Hunter/Ronson comes closest), but they always have a driving beat. The OP for the final Ranma season, Once Bitten Twice Shy by Hunter/Ronson, Jean Genie by Bowie, The Third Hurrah by Jethro Tull quite a few more, really.

8. What fictional character do you particularly identify with?
Any character who had big dreams but always chose the safer route. For family, for security. Small regrets until he sees his kids safe and his business secure, then he realizes the value in the smaller world. There must be a character like that somewhere. Walter Mitty?

9. Which mode of literature do you find most congenial: comedy, romance (in the Arthurian, high-fantasy sense), tragedy or satire?
Probably satire.

10. Who is a writer you once thought highly of but have since outgrown?
Actually a Playwright, Neil Simon.

1. I discovered anime very late in life, other than Saturday cartoons like speed racer that I had no idea were anime at the time.

2. I have been in musical groups on and off since High School.

3. I play bass, sing, write lyrics/music and dabble in piano and guitar.

4. I run  the family business. A countertop fabrication shop.

5. I have two wonderful kids.

6. Married/divorced twice. I have indeed learned my lesson.

8. I used to scuba dive often.

9. Block Island, R.I. is a wonderful vacation spot, but it used to be better when I was a kid, like many beach destinations were before regulations limited access and use.

10. I hate mosquitoes more than any other insect.

11. I am an extreme newcomer to blogs, and it shows.


Thank you, again, Don for giving me this opportunity.

Since I read so little blogs/forums, and since the ones I do have likely been either nominated or would ban me if I did nominate them, I will have to decline passing the award on. Maybe next time.